It turns out, being crowned Bluffton’s ugliest dog isn’t an insult. Some might argue, it means their pooch is a champion.

“Ugliness is in the eye of the beholder,” said Richard Coffield, who’s run Bluffton’s Ugliest Dog Contest at Mayfest for over three decades. “The one that wins wouldn’t be able to get in the door at Westminster.”

Richard Coffield quips about the event with veteran ease, but his wife, Beth, is quick to add that the whole competition is a novelty.

“There are no ugly dogs,” Beth Coffield smiles, in between scrawling entries onto index cards.

The event began 34 years ago. But in the past two years it wasn’t held due to the coronavirus.

From the start, it was a contest made for Bluffton, Richard Coffield said. Back then, the town newspaper was called the Bluffton Eccentric, so really, Coffield surmised launching the event “wasn’t that crazy of an idea.”

Between the Coffields and judge Cheryl Wilkes-Berry, it’s hard to put a finger on what really makes a dog ugly. Scraggly fur? Maybe. Unbathed? Wilkes-Berry doesn’t think so. One breed doesn’t tend to defeat others year-to-year, Richard Coffield said. Though, he’s seen hairless dogs reign more often than not.

Sometimes, dogs will go on a winning streak. Other times, rules are bent. Such as the time an entrant brought a goat.

But none of the contestants were incognito Saturday afternoon, as a hearty crowd gathered around the Heyward House pavilion in Old Town Bluffton.

From a pooch called “Old Dirty Baxter” to those with green-dyed ears, ruffled tutus, flower crowns and floral bandannas, it was up to judges to find a winner. At stake? Pottery pieces that could be displayed as vases, stamped with the winning title.

In what was simultaneously the cutest and ugliest showing of 16 canines, some sported tricks and their obedience (no, tricks didn’t count for points), judges were quick to label their No. 1 pick.

Ten-year-old Charlie, a scraggly nearly-black rescue with leaves stuck in his waves, stole their hearts. And the title of Bluffton’s ugliest dog.

Recently, Charlie’s DNA was sent out for testing. Broken down, he’s about a third pit bull and has some chow chow and Boykin spaniel in him.

Charlie was adopted from Brooke’s Bed and Biscuit after a stint at Beaufort County Animal Services. He was a sick, hairless puppy with little luck getting plucked up by a loving family.

For his owners, he’s the poster-pup for Beaufort County shelter, showing that even the dogs that may take a while to be adopted, are worthy.

Charlie’s kind of built for the competition. His Facebook page, Ugly Charlie, lauds his title. This year is his fifth win.

“He’s a champion,” Mimi Molina said of Charlie’s Ugly Dog Contest win. “We take it very seriously, people call him cute and we say, ‘How dare you.’ ”

At home, Charlie’s the leader of the pack, Steve Hale’s best bud and is just “full of goodness,” his owners said. The other rescue Charlie shares the house with, a Goldendoodle named Sampson, has been in several plays. The two couldn’t be more different.

Sarah Haselhorst, a St. Louis native, writes about climate issues along South Carolina’s coast. Her work is produced with financial support from an Energy Foundation grant. She graduated from University of Missouri — Columbia, where she studied journalism and sociology. Previously, Sarah spent time reporting in Jackson, Mississippi; Cincinnati, Ohio; and mid-Missouri.

Sun May 8 , 2022
The path to longevity fame for a brown-eyed Chihuahua in Greenacres began with a routine dog rescue and a name change from Peanut Butter. It was filled with (two) decades of companionship, exercise and, yes, eating vegetables. And then this spring, weighing in at a “solid seven pounds,” TobyKeith realized the goal pet owners […] 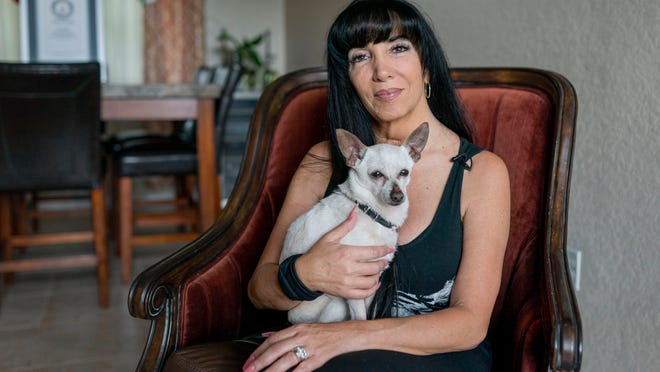