Emergency veterinarian Katie Venanzi examined a community cat named Buddy who arrived at her Philadelphia clinic, and with a heavy heart, figured he might not survive after a vicious dog attack.

The black cat was barely responsive after a mauling, which happened after two boys, ages 12 and 17, allegedly let their dogs loose on Buddy.

But as Venanzi tended to his many wounds, she noticed the kitty growled at staff at BluePearl Pet Hospital and thumped his tail on the table — a telltale sign of feline annoyance; she knew she had a fighter on her hands.

Buddy not only pulled through his brush with death on March 22, he is now physically healed, though he has some emotional scars, Venanzi said.

He also has become a sudden celebrity, bringing in so many donations to the Philadelphia SPCA that the funds are now going to help other sick and injured animals.

“I think people were outraged by what they saw, and I think they also were rooting for Buddy,” said Gillian Kocher, director of public relations for the PSPCA.

When Buddy was attacked, he was in front of a home in Philadelphia’s Frankford neighborhood, where the homeowners would leave food and water out for him.

A surveillance camera captured the attack, in which the boys were walking two dogs and apparently encouraged them to maul the cat, until homeowners came out and stopped it.

Police arrived and Buddy was taken to the Philadelphia SPCA, then the emergency clinic. Officers launched an investigation.

A video of the attack went viral, and the PSPCA shared Buddy’s story with the news media. A wave of people were disgusted with the cruelty and started cheering on Buddy.

“He’s been through a lot, but he’s kind of a symbol — not just for hope and recovery, but he’s saying to other cats that hopefully this won’t happen to them,” said Kocher.

The PSPCA posted on its Facebook page about Buddy several times, starting on March 23, when it was unclear whether Buddy would survive. People shared the story far and wide; they gushed over Buddy in the comments.

“Buddy we all love you. What a brave boy you are!” wrote one Facebook user.

“Donated. Prayers for this sweet boy who did not deserve this,” wrote another.

“Your story will not go unheard,” wrote a third person. “This act of animal cruelty should never of happened.”

Buddy’s recovery led to more than $100,000 in donations from around the world to the PSPCA’s Buddy fundraising page. The shelter’s “Save Every Buddy,” movement, as well as slogan T-shirts raised an additional $30,000.

World’s tallest dog is 7 feet on hind legs. He likes to sit on laps.

After paying for Buddy’s medical care, the rest of the money will now go to cover care for other injured and sick cats.

Kocher said the response to Buddy is unlike anything she has seen in her seven years at the shelter.

“It was just amazing,” said Kocher. “There really are no words on the outpouring of support just for this one animal.”

People felt a connection to Buddy, she said.

“Obviously he’s a cat, but he really was kind of an underdog,” Kocher said.

Millions of bees were dying on a tarmac. Local beekeepers ran to help.

The two boys who allegedly released their dogs on Buddy are charged as juveniles with crimes including aggravated animal cruelty and animal fighting. The dogs they were walking that day were also taken into the ASPCA care.

As for Buddy, he may have found his forever home. Venanzi, the veterinarian, approached the shelter about fostering him after he was discharged from the clinic but was still in recovery.

Venanzi’s husband, Dave, came up with the idea to take the cat, knowing how much his wife had bonded with Buddy. One of the couple’s two cats had died in January, and they had room for another.

They brought him home on April 1, and Buddy promptly started purring and then jumped into Dave’s lap.

“We kind of had a feeling we would end up being a first-time ‘foster fail,’” said Dave Venanzi, 35, describing the common animal-rescue story where a foster pet finds its forever home with foster parents.

The Venanzis said they are about 90 percent sure they will keep Buddy, explaining they want to be sure their home is the right place for him. There have been many others offers of adoption.

Katie Venanzi describes Buddy as vocal, laid-back and a “big love bug.” Her colleagues at the clinic cooed when they spotted Buddy on a recent staff Zoom call.

“He’s become like my little shadow,” she said. “Everywhere I go, he’s right behind me.”

Kocher said it would be a perfect outcome if Buddy ends up with the veterinarian who saved him.

“It just kind of wraps it all up,” she said.

Have a story for Inspired Life? Here’s how to submit.

What Your Dog’s Behavior Means

Fri May 13 , 2022
This doesn’t mean that every time your dog pants, yawns or lifts a paw, he’s on the verge of a breakdown. Dogs pant when they’re hot, too. Some dogs, such as pointers, lift their front paws when they pick up a scent. Yawning can also mean, of course, that your […] 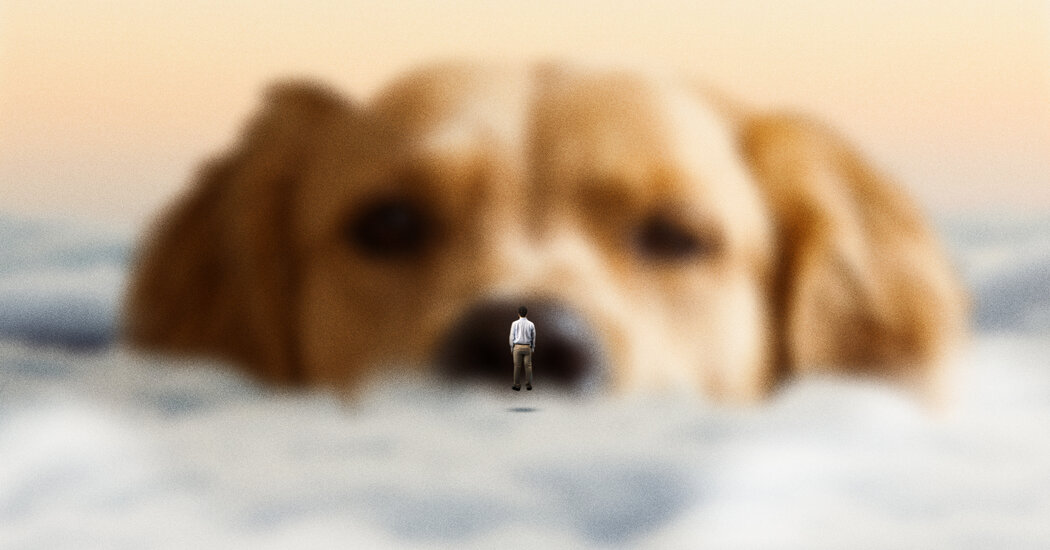