It did not look all that good for Flagler Beach’s Hang 8 dog competition early Saturday morning. “We started the day with dread,” says Eric Cooley, “because we started the day with rain and lightning in the distance and I was up the night before till about probably midnight, checking weather.”

Cooley, the Flagler Beach commissioner and business owner, organized the competition with Mayor Suzie Johnston after the couple watched a dog-surfing event in St. Augustine last fall. They thought it’d be perfect for their town, where beach, dogs and stupid pet tricks are made for each other. But they had no idea what to expect on a shoestring budget, marketing limited to social media and the few articles Cooley’s pitch to his own city commission generated.

Even Cooley and Johnston had their doubts. “Do you think we can pull this off?” Cooley had asked her months ago. “Heck no we cant,” she told him, “but Wednesday thinks we can!” Wednesday is one of their dogs, the surfing one.

So they had reason for dread, not just about the weather. The day started “with a whole lot of stress,” Cooley said. “I mean, heck, we didn’t even know if we were even going to get any type of crowd or if anybody would even show up, it started pretty small.” That was at 8 a.m. Maybe Johnston’s worry that the event would draw no more than five participants would come true.

But before long, the sands and the boardwalk at South 5th Street were packed–a surfer described it as “a wall–of spectators–the 75 t-shirts Johnston had designed for $20 a shirt had sold out. “Once we got past the initial 8 o’clock hour, everybody started packing in,” Cooley said, as the various competitions got under way–the tandem between dog and dog owner, the small dog category, the large dog category, the costume contest.

“I was out in the water surfing with Eric and his dog Wednesday, and we looked back and the entire beach was packed, the entire boardwalk was packed. And I looked at him and I was like, we had no clue that it was going to be this big.” They’d expected 200 people. Police Chief Matt Doughney says the crowd peaked around 300, but the event lasted from 8 a.m. to 1 p.m., drawing people all morning and early afternoon. Johnston says it may have drawn 1,000 people in all.

JJ Crane had entered the tandem competition with his chiweenie–a cross between a chihuahua and a dachshund–who’d never surfed before until two days before the competition. He had the same reaction as Johnston once he got into the surf. “I turned around and looked back at the beach,” Crane said, “I was like, holy shit, there were so many people, you couldn’t see the sand.” He said it was more people than the Tommy Tant Classic would draw.

Crane and his dog Reece ended up taking gold and silver. “That vibe that’s in Flagler Beach, it was good, it felt like the old Flagler Beach.” Crane grew up there in the 1980s and 90s, back when that world was simply divided: “You were either a surfer or you weren’t.”

Carla Cline, also a Flagler Beach native and surfer who turned up for the competition as a volunteer–and who not long ago played a significant role in saving the beach–saw a natural fit for Hang 8.

The event, Cooley said, has been “mandated by the public” for the future.

The surfing competition drew some 20 dogs. The donation was $20 to compete, $10 to participate in the costume contest, which drew 25 entries (Tigger won, a yellow lab dressed up as a cowboy). There was a dog-bone hunt, a hydration station, and emceeing the whole time by Travis Ajay. County commissioner Greg Hansen showed up in a referee costume. Commissioner Deborah Phillips entered the costume context. Commissioner James Sherman was a spectator.

There were no reported incidents between dogs, between dogs and humans, and,. most remarkably, between humans and humans. “It was such a happy–you want to say happy go lucky type of event, where everyone was willing to lend a hand to see it be successful,” Johnston said. One business even made dog popsicles.

“Everybody got a medal and a bandana for their dogs,” Johnston said. “It was just a really cool time to put dogs as number one one. When they say my dog digs Flagler Beach, it’s true. That’s all the what was different about it. When there’s a sporting event, families come out parents come out. And what we noticed was this event, it was dog lovers, and dog lovers are all different types of people. You have different political views. You have different family views. You have different visitors. We had people come from Miami, Jacksonville. We had lots of people stayed from out of town during the week before everyone was text messaging, text messaging us wondering, are there dog-friendly restaurants? Dog-friendly hotels?”

Johnston has no doubt Hang 8 is now on the county’s map as an annual event, with the Tourist Development Council involved in its promotion and likely its underwriting. The TDC is always on the hunt for crowd-grabbing events to bring to Flagler. The difference this time is that Hang 8 is home-grown and entirely organic–by Flagler Beach, of Flagler Beach, but for everyone.

The TDC’s Amy Lukasik set up the competition’s dog-kissing booth, just as she’d unveiled a TDC billboard promoting Flagler Beach on I-95, coincidentally, with a dog on a surf board.

Cooley and Johnston expect they’ll be debriefing their commission at the next meeting Thursday, though Cooley had posted a debriefing of his own already on Facebook. At the end of a list of thanks longer than an Academy Awards speech, he reserved his ultimate compliments for his dog Wednesday, “the one who started Hang8.”

The money raised went to K-9 for Warriors, Pet Rescue and the Humane Society.

There are two cats in this picture. Can you spot the tiny kitten that’s hiding? | Trending

Thu May 26 , 2022
If you’re someone who has their social media feed flooded with animal photos and videos, this picture posted on Reddit will make you extremely happy. While at first glance it may seem like just another gorgeous picture of a cat sitting proudly on a couch, a closer look at it […] 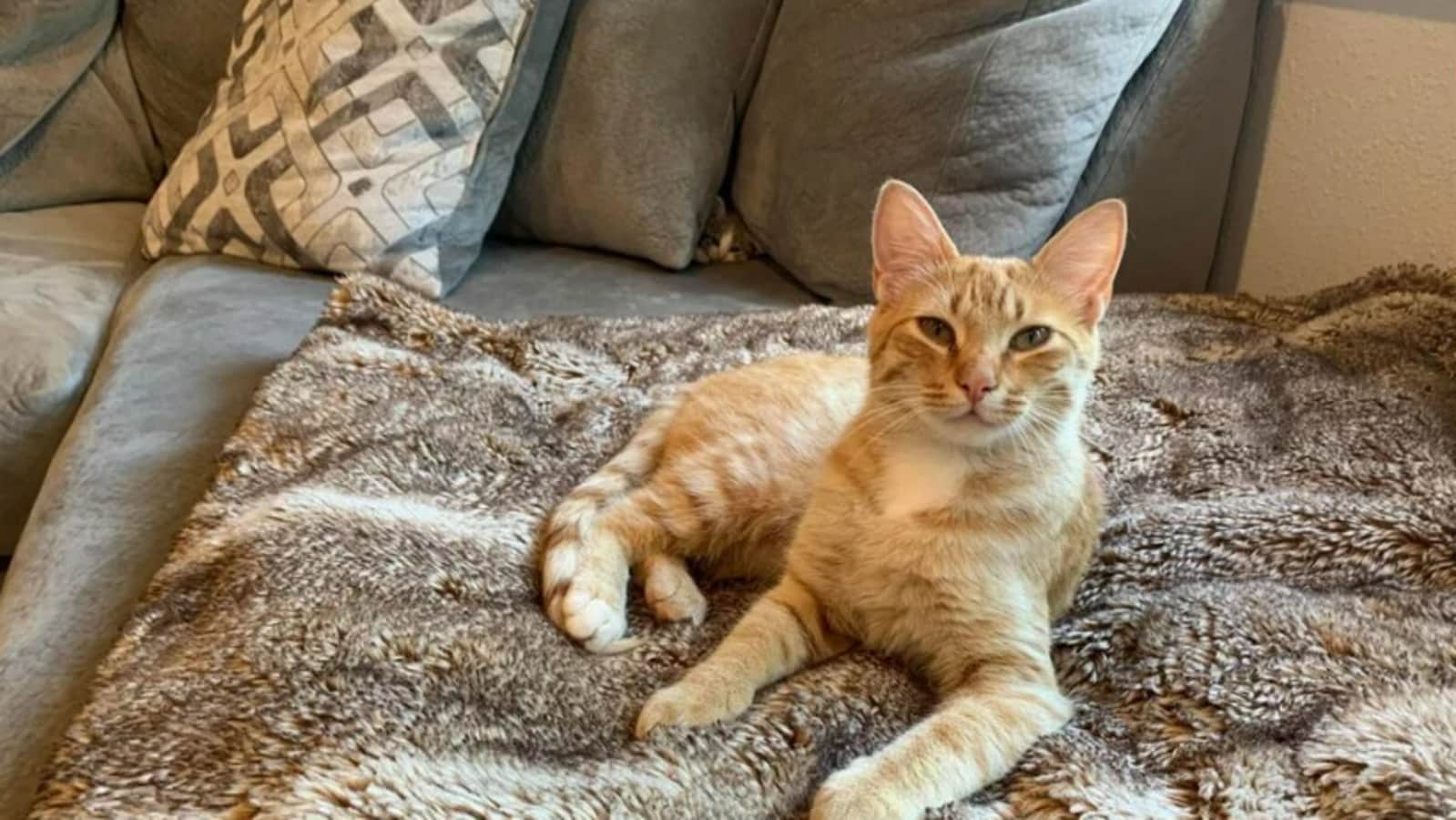