Even when he was a kitten, Hercules was a big boy. Or, as his humans called him, an “unapologetically fat chonky cat.”

“From the time he was a kitten, he just gained weight so astronomically fast,” recalls Erika Kathryn, a Toronto-area healthcare worker. “I was calling the vet and I just got the generic advice to feed him less.

“I would say ‘I’m trying, but he is still expanding vertically and horizontally.’”

That was 13 years ago. Sadly, Hercules died right before the Christmas holidays last year, after a lifelong battle with pancreatitis — an unrelated condition. Also sadly, when he crossed that rainbow bridge, he was almost at his fighting weight — 20 pounds. That might sound like a lot for a cat, but Herc, who was part Maine Coon, was very tall. Not tall enough to support 30 pounds, though, which he somehow managed at his heaviest.

Despite this, he lived an “outstanding” life, even becoming an internet sensation after his humans began chronicling his weight loss journey on his personal website, Fat Cat Hercules, and social media. Hercules, a self-proclaimed feline obesity educator, had a quarter-million fans on TikTok.

“What he was famous for was that he was just unapologetically fat,” said Kathryn. “The persona he had online was that he hated his diet and didn’t know why his humans didn’t embrace the body positivity movement.”

Herc’s life may have been outstanding, but fat cats are far from unusual. An estimated 50 per cent of middle-aged cats in North America are obese. And, once they’re overweight, it can be very hard, as Hercules learned, to lose the excess. The good news is that there might be some hope for a preventative solution, thanks to researchers at the University of Guelph who are exploring the importance of choline — a micronutrient associated with fatty liver disease.

“It actually started with a collaboration with Marica Bakovic, a nutritional biochemist in the department of human health and nutritional sciences,” explains Adronie Verbrugghe, professor at U of G’s Ontario Veterinary College who studies pet nutrition and obesity. “She found that mice with a choline deficiency developed fatty liver and, when they supplemented choline, that fatty liver resolved.”

Earlier this year, Verbrugghe and Hannah Godfrey, a PhD student in biomedical sciences, published the results of their research on cats, which was inspired by the mouse study. They found that kittens who ate a choline-enriched diet ate less and gained less weight than the control group that ate in accordance with current nutrition guidelines. (There are already minimum recommended choline levels — the question is really whether or not they’re high enough.)

And, one of the most exciting things about all of this, is that the kittens were spayed and neutered. As many cat owners know, that’s huge, since that’s when most cats start to gain weight. It’s a hormone thing. And four in five domestic cats are spayed or neutered, which puts them at risk for obesity. Verbrugghe hopes that this is an important step toward re-evaluating the nutritional requirements of cats.

“The goal of this research,” she explains, “is really to call on the pet food industry to change the diets that are currently available and include higher levels of choline — not just the minimum needed to prevent deficiencies, but an additional volume that would support optimal growth and benefit fat metabolism.”

What about the cats that are already overweight, though? Unfortunately, there’s no evidence that upping the choline will help with weight loss.

“Cats are really tricky when it comes to weight loss,” said Verbrugghe. “If you restrict calories too much you could cause the mobilization of fats within the body and storage within the liver and that can sometimes lead to hepatic lipidosis.”

Hepatic lipidosis can be a fatal condition in cats, which is one of the key messages that Hercules was trying to get out there with his social media campaign. “If there’s anything I could tell people it’s that, if you think your cat needs to go on a diet, you need to do it under veterinary supervision,” said Kathryn. “And if your veterinarian does not have the tools to help you with that, then get a second opinion. Or a third opinion.

“The last thing you want to do is just cut your cat’s food in half willy-nilly and cause a life-threatening condition.”

And, of course, there’s always exercise. It’s hard, though, to convince a cat to workout. Few cats enjoy going for walks. Facebook Marketplace is full of never-used cat exercise wheels. Kathryn didn’t even buy one for Hercules, since she discovered he was heavier than the recommended weight for safe wheel use.

That particular TikTok video got some nine million views. Hercules didn’t find it as funny as his fans did, though.

To hear him tell it on Insta, it didn’t even seem healthful. From his point of view, it felt a lot more like “floaty floaty murder time.”

Tue May 24 , 2022
Luca de Dufour, Grade 1 (left), and Nathan Bouchard, Grade 3 (right), help to sort the pet food donations from the Teacher’s Pet Contest and Food Drive at Long Meadow Elementary School. Donations were given to Brass City Rescue Alliance in Middlebury and Animals for […] 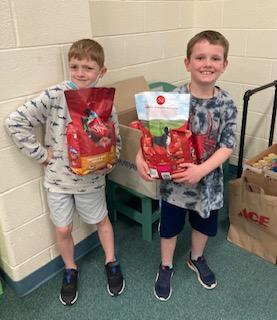