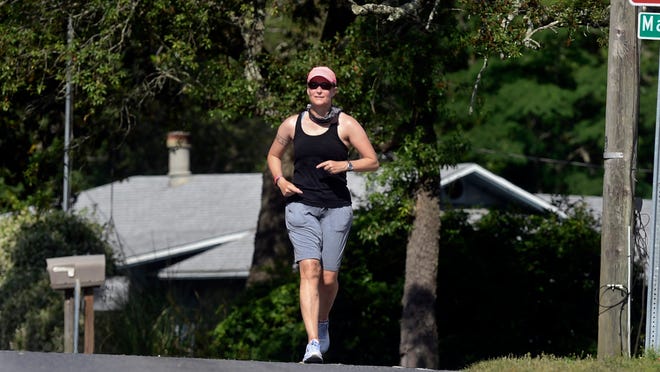 You could be forgiven if you didn’t realize there was a marathon taking place all over Fort Walton Beach on Wednesday. There was no pack of runners, no crowd of cheering fans and no blocked-off streets.

This marathon had a single runner with very personal reasons for her run.

Mary Esther resident Wiebke KenShin Andersen left her home at 7:15 a.m. Wednesday, to embark on a route that would take her through mostly residential streets in Fort Walton Beach, the Ocean City and Wright neighborhoods, Shalimar and then back home through Fort Walton Beach and Mary Esther.

The 52-year-old Andersen arrived back home 6 hours and 14 minutes later, clocking in exactly 57.000 steps on her GPS unit.

Andersen has run a marathon before and is no stranger to the hobby.

“Running has been my “go-to health program, both mentally and physically,” she said.

But the impetus for the marathon came from the loss of one of her cats, a black-mustached calico named Frida. Anderson found the cat in poor health and living on the streets in May 2021. She took the cat in and nursed her back to health as best she could, but unfortunately Frida succumbed to cancer in January.

“When Frida died, I decided I was going to run a marathon,” Andersen said. “I was really sad, so I just poured my energy into running.”

When she started training three months ago, she decided that in addition to honoring her lost cat, she would use the marathon as a fundraiser.

Andersen serves as operations manager of the Zaltho Foundation, a local nonprofit organization that promotes peace and non-violence through spiritual practices rooted in self-reflection. The foundation holds workshops nationally and internationally that help to address the causes and consequences of violence and help people who suffer from trauma.

The foundation was created in 1993 by Vietnam Veteran Claude AnShin Thomas, and one of groups served by the foundation are combat veterans and their families.

“Animals are so important to us, and that’s especially true for veterans.” Andersen said.

So she decided she would use her marathon as a fundraiser to help veterans who cannot afford to provide veterinary care for their animals.

She created a GoFundMe page and so far has raised about $2,500 toward her goal. Andersen plans to coordinate with local veterinarians to help distribute the funds to veterans in need.

“Running, animals and veterans have always been close to my heart and mind,” said Andersen, who ran her marathon with a picture of Frida pinned to the back of her running jersey and focused on the cat when things got tough.

Andersen said the last 3 or 4 miles running down Hollywood Boulevard were the biggest challenge, primarily from the heat and the lack of shade.

“There was no way I was not going to finish, even if I had to walk it,” said Andersen, who added that she kept thinking, “This is for Frida and all animals.”

Insights on the Crickets Global Market to 2029