Petland recently hosted franchise owners and store managers from the U.S. and Canada at its 55th anniversary trade show held in Orlando, Fla. The event offers attendees the opportunity to connect with each other and corporate partners, and to receive education and industry updates geared toward their business success.

“It is important to bring our teams of corporate stores, franchisees and vendors together to share experiences, ideas and to assure that Petland as a whole is up-to-date in the areas covered within our mission statement,” said Joe Watson, president and CEO of Petland. “Pets are an important part of many families, and consistency with the service and interactions we have with our customers around the world is paramount to assuring quality, lifelong relationships.”

Petland’s mission statement is focused on the value of its pet counselors and staff in “matching the right pet with the right customer and meeting the needs of both; and to enhance current pet owners’ knowledge and enjoyment of the human-animal bond,” company officials said. With its “Stronger Together” theme for the conference and trade show, there was significant focus on service, quality, the value of relationships among the franchisee community, and in the local communities that are served by each respective store, officials said.

Petland Lake of St. Louis, M., was named Petland’s 2022 Domestic Store of the Year. The franchise is owned by Tom and Mary Killmade and Jeff Hartmann. The trio has owned Petland Lake since 2007, and recently opened a second St. Louis location. In accepting the award, Tom Killmade shared what drives the store’s owners and staff.

“We love the animals. We got in this for the love of pets,” Killmade said. “I don’t know that I ever thought we’d be recognized for everything we do. So, to have these people that I respect so much call it out, in front of God and everybody means a lot more than I thought it ever would. Being named Petland’s domestic store of the year feels amazing.”

Another highlight of the event is the annual trade show that allows store owners to connect with vendors and learn about new products and services available for pet owners of many species. The 2022 Petland Trade Show featured 55 vendors with products that included animal nutrition, pet care, toys, and pet security services and technology. Seventeen vendors participated in the annual trade show for the first time this year.

Tue Jul 19 , 2022
One competitor won his 15th contest and another reclaimed her title as the world’s top ranked female eater during the Nathan’s Famous International Hot Dog Eating Contest on Monday. Joey Chestnut, 38, who is known as “Jaws” and holds 50 world records in eating competitions, finished first after gobbling 63 […] 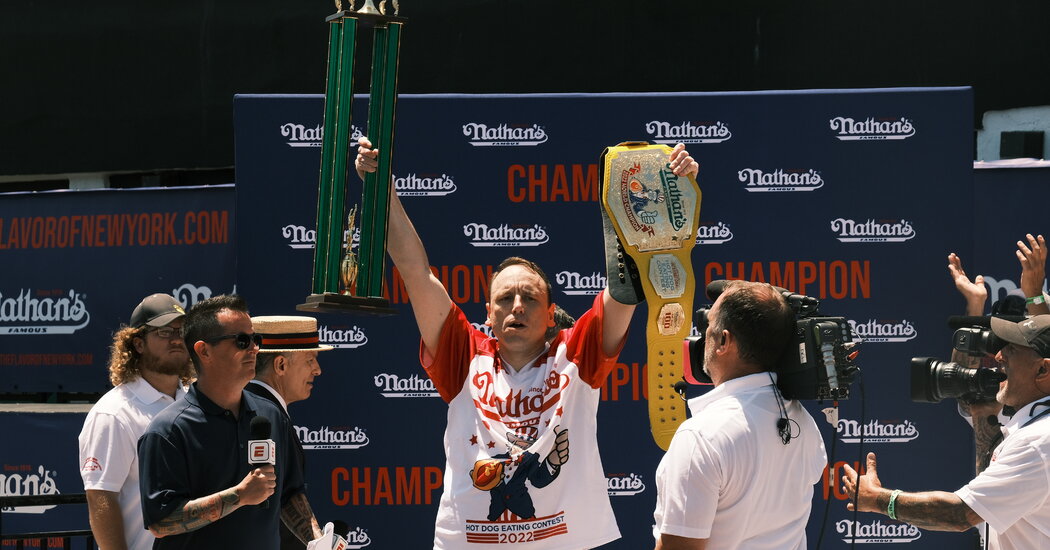