FARGO — Jeff Carney and Mona Estrella Carney Mendez were vacationing in Florida two years ago when the two dedicated cat fanciers started talking about how much they missed their feline fur babies back home.

the couple didn’t have to think twice: They would gladly take a detour and drive 48 miles in the other direction to check it out.

They loved everything about the place — from the fancy coffee drinks topped with cat faces in foam to the chance to get their stress-busting “feline fix” by scratching the chins of mewing, purring, velvet-eared cats.

“We’ve been dreaming (about a cat cafe) ever since then, really,” Jeff says.


The couple, who travels a lot for their network-marketing business, make it a point to “cat-feinate” at any cat-coffee shop they can find.

Now they’ve teamed up with another Fargo cat fancier, Kari Hager, to launch

a proposed “cat, coffee and cryptocurrency” shop in the Fargo area.

The purpose of a “cat-fe” is two-fold. On the one paw, it allows patrons to sip coffee and “cat-watch” the antics of the kitties in the adjoining cat lounge, which is typically divided by windows. On the other, patrons can pay an admission to enter the lounge, interact and play with the residents and then, if interested, place an application for adoption.

The Carneys have already reached out to Gail Ventzke, executive director of the local

to see if the agency would be interested in partnering with them. But they still have a few big hurdles to clear, including an actual location.

Hager says the group has been working with a Realtor and has found one particularly promising spot in the area.

“Every time we look at a location, we’re looking for the cats first,” says Hager, a cat owner who professes a soft spot for

. “And if the coffee can fit inside of it that’s good.”

Cat cafes have actually been around for a while now, starting first in Taiwan with the Cat Flower Garden in 1998. The

in southeast Asia and Japan, where residents’ limited space and tiny apartments make it difficult to keep a pet.

The concept eventually spread to North America, with the first cat cafe,

, opening in Oakland, Calif., in 2014, according to NBC Bay Area news. Today, there are 141 cat cafes in North America —with most of them in the US, according to

Unlike their Japanese counterparts, most US cat cafes are devoted mainly to cat adoptions.

After a 21-year-long struggle with infertility, the Carneys had grown to view their cats like their kids.

Jeff admits he grew to appreciate the beauty and personality of cats through Mona. “I love cats,” she says simply. “ I want one in every color, but I can’t have that at home.”

Mona says her own grandmother could train cats as well as any dog, and the Carneys themselves soon learned how to also train their own kitties—two male littermates named Beaver and Cashew.

The Carneys trained Beaver and Cashew to walk on a leash, ride in a kids’ stroller without jumping out and even sit patiently in a transparent backpack-style cat carrier.

The felines became such intrepid travelers that they accompanied their humans to 17 different states over the years.

Unfortunately, Cashew got out of the car during one of their trips and was hit by a car. “It was really traumatic,” Jeff says.

Now Cashew is honored, along with his brother, on Purrfect Cup’s logo, in which Fargo graphic artist Stephanie Drietz drew them snuggling as kittens.

The couple fell in love with the cat-cafe concept due to “our love of cats and wanting to be able to help,” Jeff says. “When I saw the concept, I thought, ‘That’s the best way to help someplace like Cat’s Cradle.”

Their initial plan had been to open the cafe in December of 2021, but along the way, life happened. Both Mona and Jeff lost their moms. They each own several businesses, which require a lot of travel. And, finally, after years of infertility, they had a baby boy: Anthony.

Meanwhile, unbeknownst to them, Kari Hager’s interest in anime and Japanese culture had introduced her to the world of cat cafes. Since then, she had dreamed of opening such a cafe.

The three finally connected when Hager found the Carney’s Purrfect Cup website and reached out to them.

“It has been very busy, with our other businesses, so when (Hager) came back in, it lit a fire under us,” says Mona, adding that it will be good to have someone pushing their mission forward when they are traveling for work.

A peek inside a ‘cat-fe’

After checking out multiple cat cafes around the country, the group has a pretty good idea of how they’d like the “Purrfect Cup” to look.

To meet health regulations, the coffee shop will be separated from the cat lounge, which would be designed to be a homey and engaging domain for adoptable kitties. Ideally, they’d like to install windows between the two rooms to allow coffee customers to watch the cats chase, lounge and frolic.

Patrons could opt to pay admission to enter the cat’s domain, so they could interact with the mousers and get to know them better. That money would be used to defray cat-care costs and to create additional donations for Cat’s Cradle, they say.

As a safety precaution, the space’s layout would include a vestibule in case a Houdini Himalayan tries to make a run for it.

The Carneys and Hager agree that the space should have plenty of windows to the outdoors, so the cats can bask in sunlight. “We’ve been to places where the cats didn’t have that, and the cats didn’t seem nearly as happy as those in places that did,” Mona says.

They’d also like to include nooks and shelves that allow cats to perch up high or down low —whichever height they prefer. And there would be plenty of toys and cat trees, along with chairs where humans could sit while playing with their fur buddies.

The Carneys say they’d like to form partnerships with local small businesses so they could support each other. For instance, they could display cat trees, toys or cat art made by local craftspeople.

“We want to utilize our community as much as we can,” Mona says. “Because without a community, we’re not a community.”

The group initially envisioned that a place that melded animals with beverages and snacks might be a health-inspection, well, cat-astrophe.

“When you talk to people at different cat cafes, it is a major hurdle,” Jeff says, pointing out that a cat-cafe in Tennessee was ensnared in a legal battle for six years before they could get a paw’s up for their business.

But when he approached Fargo’s local health inspector, he discovered a welcome surprise: Someone else had approached the department a year earlier about a cat-cafe, so the agency had already drafted a special policy for a similar arrangement.

The key, they say, is for the food/beverage room and the kitty kingdom to be kept in two separate rooms, separated by a door, and no single employee could work interchangeably between the coffee area and the cat area. That means at least two different employees — a barista and a “cat connoisseur”— must oversee the two different sections of the space at all times.

Handwashing and sanitizing stations would also be key for customers, they say, and customers will need to sign waivers that free the business from responsibility should a tired or cranky cat lash out and scratch.

When brainstorming on the cafe, Jeff says his only real hesitation was the coffee part of the equation. “This is a very competitive market for coffee,” he says.

He admits he knows nothing about the intricacies of a coffee shop, which span from the care and feeding of a high-end espresso machine to finding a location that isn’t between two Starbucks and a Caribou.

But along the way, he reached out to the owners of

and learned that West Fargo-based business would be willing to train their employees and help them source equipment and coffee.

Jeff’s other contribution to the business is its use of cryptocurrency. He believes the acceptance of virtual currencies like Bitcoin could be a novelty that would establish Purrfect Cup as one of the first businesses in the area to work with cryptocurrency. (Conventional currency will also be accepted.)

says she has been approached by several different groups in the last few years about partnering with the shelter to form a cat cafe.

The Purrfect Cup crew, however, seems to have nine lives when it comes to executing their goal. “I think it’s a good thing and I think we definitely could use something like that,” she says. “This is the first one who seemed to follow through as much as (Jeff) has.”

A cat-cafe concept would allow the cats to live there in a communal setting, which tends to be better for the mental health of most cats, she says.

It also would provide an environment that allows potential owners more time to spend with the cat and assess its temperament, which can set the stage for more successful adoptions, she says.

However, set-up of such an operation could be complex, Ventzke says. Many logistics would need to be worked out, from transporting cats to the cafe after determining which ones prefer a commune-like setting to figuring out a protocol if a cat in the lounge gets sick, she says.

She would also want people to know that they couldn’t simply walk out with a cat. Their adoption application would still need to be approved by Cats Cradle, and she would make the same phone calls to verify information that she does with any adoption.

Ventzke also hopes there will be enough cats to keep the cafe’s cat lounge consistently populated. Not every cat thrives in a communal setting and precautions need to be taken before bringing fragile kittens into a space historically occupied by adult cats, she says.

“It’s just going to be a work in progress, to see what works,” she says.

Adds Jeff Carney: “We see our mission as extending their mission. “

Cat rides on a bike through streets of London

Sun May 8 , 2022
From Tower Bridge to Trafalgar Square, there’s lots to see in London. But one particular sight with two wheels and nine lives is generating significant buzz. A bike-riding cat named Sigrid is the city’s newest attraction and has been taking the internet by storm. She and her owner, […] 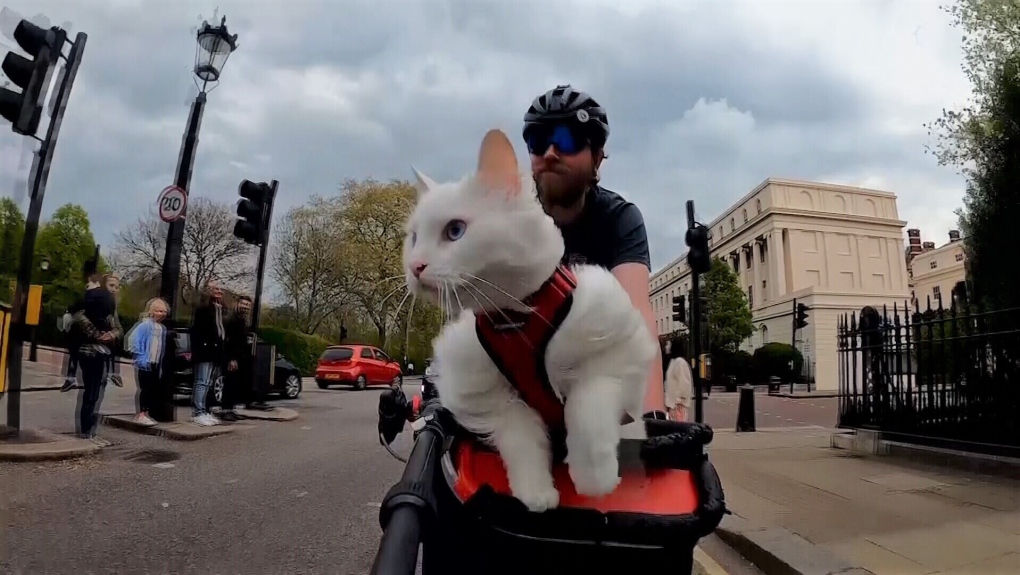