Hutchins was not in his assigned kennel at Animal Care Services (ACS) the day Kym Virdell went looking for him.

The black-and-white mixed-breed dog, a young stray placed on the “urgent list” on a recent Thursday due to overcrowding at the shelter, had been given a reprieve.

Virdell, an assistant live release manager for the animal rescue nonprofit San Antonio Pets Alive (SAPA), sought Hutchins and three other dogs tagged by the organization in order to buy them more time to find a home through fostering or adoption.

But she had to hustle.

Six days a week, the animal rescue nonprofit and others like it have less than two hours to physically rescue the animals that are about to be euthanized. ACS euthanizes pets when all attempts at placement have failed and there is an immediate need for capacity.

In recent weeks, the list of dogs, puppies, cats and kittens that could be killed if not rescued by SAPA or another group before the 12:30 p.m. deadline has increased dramatically, according to an ACS spokeswoman.

When the daily list exceeds 25, SAPA declares it a “code red” day, and summertime has brought many of those days — as it often does. But SAPA and other groups like it are scrambling to save as many pets as possible.

Last Thursday, as Virdell walked past the rows of kennels, where often female dogs guarded a full litter of squirming puppies, she found Hutchins had already been moved to Building 6, the last stop before being euthanized. And it was nearing 12:30 p.m.

Several other animals were already being rescued that day by Animal Defense League staff, as well as by ACS workers who took them into their offices in the administration building, giving the dogs a few extra days while a team works to find placements for them.

Sauntering back across the ACS campus to SAPA’s transitional kennels, the dog wagged his long black tail and leaped happily toward his rescuer.

But according to SAPA, at least one other dog was euthanized that day in what is supposed to be a “no-kill” city.

And even Hutchins’ luck could be running out — SAPA has just 10 days to find him, and three others it rescued, a new home or foster. If that doesn’t happen, he will be returned to ACS’ kennels — and could eventually face euthanization — so that the rescue organization can give another animal that chance at life.

SAPA, the only rescue organization on site at the city shelter, is one of about 200 such organizations ACS partners with throughout the country to find placements. So far this year, SAPA alone has saved nearly 2,600 animals.

But the nonprofit currently has another 804 animals in its care, most in foster homes across the city with individuals who provide temporary placement, including volunteers who provide around-the-clock care for neonatal kittens.

Despite those efforts, ACS data shows an increasing number of stray and surrendered dogs and cats are euthanized at the main shelter, a task conducted every day except Sundays.

“I feel as if we’re not educating the community of what’s truly happening,” said Alexis Moore, senior director of development and marketing for San Antonio Pets Alive.

The term “no-kill” is applied to animal welfare organizations that have a placement rate of 90% or higher, according to the Animal Humane Society. It also means that animals are not to be euthanized due to lack of space, but because of health or behavior problems, said Lisa Norwood, spokesperson for the city-run shelter.

That goal was met in the last five years, she said, despite taking in 25,000 to 30,000 animals a year. And it’s a far cry from 2011, when the live release rate was only 32%, six years after the city began to make changes in its animal care practices.

But things always heat up at the shelter this time of year, Norwood said.

“This is our busy season and so you do start to see in the summer, in the warmer months, our euthanasia creeps up,” Norwood said. In the fall and winter, those numbers tend to decrease.

Of the 2,278 animals the shelter took in during the month of June, 255 were euthanized; just over 100 of them were considered healthy. In January, 92 animals were euthanized out of the total 1,781 admitted.

Though most euthanasia of animals in the shelter is tied to health problems or behavioral issues that pose a public safety risk, Norwood said, “unfortunately, there are still occasions where we do have to euthanize because there are only so many rooms at the inn.”

Norwood also attributed the growing number of animals in the shelter to the pandemic. In 2020, many people stayed home and were able to adopt and care for pets. That has changed, and the economy is also playing a part, Moore said.

“Yesterday we had someone come into our medical care center, a [pet] owner [who] said that she’s homeless now,” shesaid. “She’s going to be evicted and she can’t take care of her pet anymore.”

On Friday, SAPA called another “code red,” as ACS planned to release for euthanasia 29 dogs, including 19 puppies. All but one were held to live another day.

Lately, the list is made up of more puppies than usual, said Moore, a sign that pet owners in San Antonio are not spaying, neutering and properly containing their animals.

On the blazing hot afternoon that Hutchins walked out of an ACS kennel, along with a shy sibling pair named Chapo and Rolo, another dog, Dice, was euthanized at the city shelter. Though they couldn’t know how close they had come to that fate, all three rescued dogs remain in the transitional center, waiting in a cage to be adopted or fostered as the clock ticks.

All pets adopted through ACS and SAPA are sterilized, vaccinated and microchipped. Hutchins was neutered on Friday.

To encourage more adoptions, ACS adjusted its fees through Sept. 5. The cost to adopt a dog or cat under 5 years old is $20, and free for senior pets.

SAPA is offering a similar special through July 31.

Tue Jul 12 , 2022
NEW YORK, July 12, 2022 /PRNewswire/ — Dogily is the first matching dog and human accessories brand that doesn’t compromise style. With a mission to provide fashionably elevated premium silk pet accessories that are comfortable and timeless.  From its inception, Dogily has always focused on developing the highest quality matching scarf […] 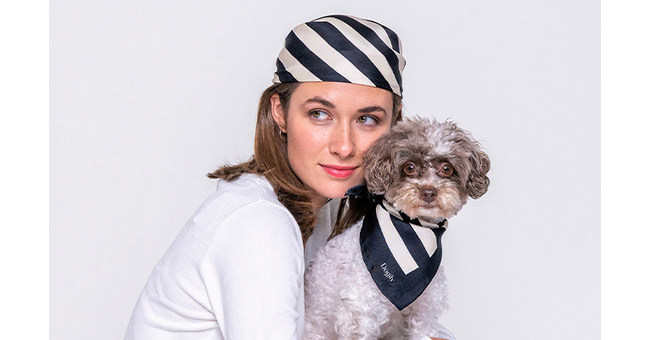